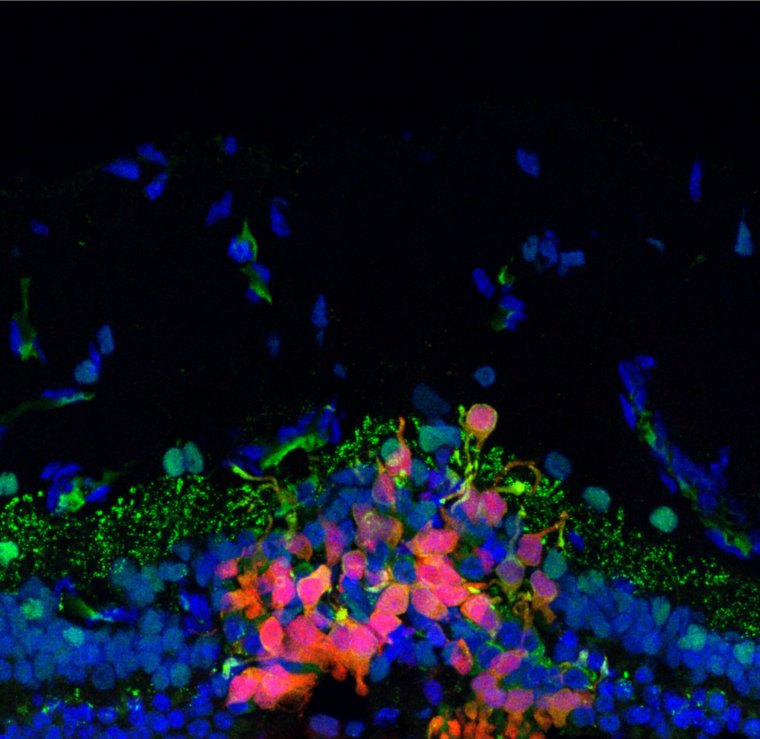 What if healthy photoreceptor cells produced in a laboratory from stem cells could be simply injected into the retina of individuals with blinding retinal diseases to restore sight?

The methodology has encountered a variety of scientific difficulties, including injected cells dying quickly or failing to integrate with the retina, while being a tantalizingly simple method for curing blindness.

A new study, published in Stem Cell Reports, overcomes these challenges and marks significant progress toward a cell-based therapy.

Researchers from the National Eye Institute (NEI), the University of Wisconsin-Madison, Children's Hospital of Philadelphia, and the University of Pennsylvania School of Veterinary Medicine worked together to conduct the study, which involved introducing precursors of human photoreceptor cells into the retinas of dogs.

The cells were able to remain in the patients' retinas for months, where they started building connections with pre-existing retinal cells thanks to a coctail of immunosuppressive medications.

"In this study, we wanted to know if we could, one, improve the surgical delivery of these cells to the subretinal space; two, image the cells in vivo; three, improve their survival; and four, see them migrate to the layer of the retina where they should be and start integrating," says William Beltran, a professor of ophthalmology at Penn Vet and senior author on the study. "The answer to all those questions was yes."

The treatment of retinal blindness illnesses has long been a focus of Beltran and Gustavo Aguirre's work at Penn Vet, and they have achieved outstanding results to date in developing correcting gene therapies for conditions with identified causal genes.

However, a gene has not been found for many inherited retinal degeneration cases. In some cases, the disease has advanced to the point that no photoreceptor cells are healthy enough to be treated with gene therapy. In either case, a regenerative medicine strategy that allowed for straightforward photoreceptor regeneration would be very helpful.

Beltran's team collaborated in a partnership funded by the NEI's Audacious Goals Initiative for Regenerative Medicine with teams directed by John Wolfe of CHOP and Penn Vet, David Gamm of the University of Wisconsin-Madison, and Kapil Bharti of the NEI to create a cell treatment.

The collaboration merged the extensive knowledge of cell-based therapeutic techniques from the Wolfe, Gamm, and Bharti labs with the expertise of Beltran's team in canine models of retinal degeneration.

Rod and cone photoreceptor cells make up a layer of the outer retina that is essential for starting the process of vision, in which light energy is converted into an electrical signal. In order to transmit visual information, they require a connection, or synapse, with cells of the inner retina. This layer's replication and integration with the other cell types of the retina are the two main goals of this cell therapy, which will help the retina relay messages from one layer to the next.

To create the basis for the cell therapy in the current study, the scientists used stem cell-derived precursors of human photoreceptor cells created in the Gamm lab. The cells were identified with fluorescent markers and were injected into the retinas of seven dogs with normal eyesight and three with a type of inherited retinal degeneration in conjunction with the Bharti lab. They then employed a range of non-invasive imaging techniques to track the cells over time.

"The use of a large animal model that undergoes a naturally occurring form of retinal degeneration and has a human-size eye was instrumental to optimize a safe and efficient surgical procedure to deliver doses of cells that could be used in patients," says Gamm.

The researchers found that the animals with retinal degeneration had considerably better cell uptake when compared to animals with normal retinas.

"What we showed was that, if you inject the cells into a normal retina that has its own photoreceptor cells, the retina is pretty much intact and serves as a physical barrier, so the introduced cells don't connect with the second-order neurons in the retina, the bipolar cells," Beltran says. "But in three dogs that were at an advanced stage of retinal degeneration, the retinal barrier was more permeable. In that environment, cells had a better ability to start moving into the correct layer of the retina."

The researchers administered immunosuppressive medicines to the dogs since the transplanted human cells might be seen by the dogs' immune systems as foreign substances in other tissue transplant procedures. The trio of medications had been tested previously by Oliver Garden, a veterinary immunologist with Penn Vet at the time of the study, who is now dean of Louisiana State University School of Veterinary Medicine.

Potential synapses were detected in the inserted cells after further analysis. "We saw that yes, some are appearing to 'shake hands' with those second-order neurons," Beltran says. "There appeared to be contact."

The next step in this experiment will be to continue optimizing the therapy before testing whether recipients experience a functional response, or better vision.